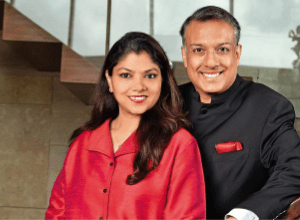 Sumant Sinha has made ReNew Power not just the largest pure-play renewable energy provider in the country but also the face of India’s renewables globally What began in 2014 as environmental responsibility has now turned into a necessity to save the world. Call it the Greta Thunberg effect, or whatever you may, the race for net-zero has truly begun. As India positions itself at the centre of the global awakening towards a sustainable future, Sumant Sinha, chairman and CEO of ReNew Power can very well be described as the right man in the right place at the right time. At the recently held COP26 congregation in Glasgow, India has committed to meeting 50% of its energy requirements from renewable energy sources by 2030, and Sinha is could become the renewable energy man of India, as ReNew Power boasts of installing 1.5 GW renewable energy capacity in FY22. This is an unparalleled feat for any private company in the country.

Over the years, ReNew has distinguished itself as a leading asset creator in the country. In terms of the installed capacity, it is among the top in the world. Its balance sheet size is close to
60,000 crore, and it is investing almost 15,000 crore every year. With an asset base of 45,000 crore, it claims to have created more than one lakh jobs across states. The company contributes 1.5% of India’s total installed power capacity and deflects 1.1% of emissions in the power sector annually. Sinha is aiming even higher in a sector that has promising targets. He says that in the next decade, the company looks to invest billions of dollars and will begin to have a real impact on decarbonising the economy. “Now we can grow at scale,” he adds.

India’s ambitious promises at COP26 hinge on the critical aspects of technology and money to access the technology. The government recently informed Parliament that India needs an investment of $1 trillion in the next 10 years to meet its Glasgow promises and expects a large part of it to be met by developed nations as annual transfers for climate finance, a hope that has historically remained unfulfilled. In fact, the pandemic has already cast a spanner in the works for investments flowing into developing countries, as it fell 10% from 2019-20, with financiers deploying more funds in traditionally lower-risk Organisation for Economic Co-operation and Development countries, according to BloombergNEF’s annual Climatescope survey. “This marked a major shift from previous years when these rapidly growing economies attracted the majority of new funds deployed,” the survey said.

It does not worry sectoral stalwarts like Sinha much. He feels that the investment tide will turn soon. However, access to technology and innovation in the field remain his concerns. His company is keeping pace with advancements both in technology as well as policy in the sector. Prime Minister Narendra Modi announced the National Hydrogen Mission in his Independence Day speech in 2021. By December, ReNew Power announced its next milestone- green hydrogen business-in partnership with Larsen & Toubro.

The advantage of technology stays unrealised if it is not backed by strong infrastructure. The renewable sector can use the same grid infrastructure that fossil-based energy does, which throws a challenge. Sinha says that grid management will become crucial as more and more renewable energy is pumped into the system. “The cost reduction in renewables is going to feed substantially into other areas. What we have seen in the solar sector will happen in batteries and even in hydrogen sectors too,” he adds. This is when batteries will become critical.

Sinha says that the battery industry has become more mature with time, which will bring down the cost of batteries and make it possible for them to be deployed extensively in grid management. “The development of batteries is being largely driven by what is happening in the mobility sector, where electric vehicles are driving the demand. These batteries will also find a place in storage in grid management,” he explains.

Every entrepreneur has a back story with sharp twists in its plot, each one of which could have altered the course of their journey. Sinha has had his share. Before his life started negotiating the turns the renewable energy sector traversed on, the Indian Institute of Technology (IIT) and Indian Institute of Management (IIM) alumnus cut his teeth in hardcore corporate finance. A delay in getting admission to the prestigious St Stephen’s College in Delhi led Sinha to IIT, Delhi, followed by IIM, Calcutta.

By 1991, the attraction of joining fellow IITians in the US had prompted him to apply to Columbia University to specialise in international business and finance. He went on to land a job first at Citibank in New York and then at ING Barings in London.

Columbia University was also special for Sinha, as he met his wife Vaishali Nigam, an investmen banker who is now the chief sustainability officer at ReNew Power, there.

Having spent years abroad, Sinha started yearning for his return to India. During one of his trips to the country, he happened to meet industrialist Kumar Mangalam Birla, who made Sinha an offer to head the finance department at his group. The offer was rejected. “I could not just get up and leave,” he says.

The same offer was reiterated a few months later following another chance meeting between two in 2002. By then, Sinha had done his homework. “I felt it was not a bad opportunity,” he adds.
This time, he took the offer. He found the stint with the Aditya Birla Group fruitful, as he got to hone skills in acquisitions.

The decisive turn in his career took place in 2008 when he got an offer from the leading wind turbine maker Suzlon Energy to head its finance department. Despite it being a short stint, Sinha recollects, “I learnt a lot at Suzlon. It has helped me in my journey as an entrepreneur. ReNew Power would not have happened if I had not had the experience at Suzlon.”

By 2010-11, with the launch of the National Solar Mission and the generation-based incentive scheme, India’s renewable sector had started coming into its own. “In fact, India got started quite early in the renewable journey,” Sinha points out.By 2011, Sinha had set up ReNew Power and was scouting for funds. Now that he was on the other side, Sinha realised that getting funded was not easy. He finally got Goldman Sachs on board, which provided the initial equity funding. “In a way, it got us started, because it gave us the capital we could build on,” he says.

A year later, ReNew Power’s first project-a 25.2 MW wind farm in Jasdan, Gujarat-was commissioned. Over the next couple of years, while the company established itself in the wind energy space, it had bigger ambitions. It started targeting the solar energy sector. Its first solar project came in 2014 when the company set up a
57.6 MW project in Madhya Pradesh. Then, ReNew Power entered the hydropower segment by acquiring the Singoli-Bhatwari project in Uttarakhand from Larsen & Toubro last year.

The next turning point came in 2015 when the government set a renewable capacity target of 175 GW to be achieved by 2022. “It took renewables-a cottage industry till then-to a whole different level,” Sinha recounts. Part two of this ambitious plan was witnessed in 2019 when Modi, during a speech a the UN, announced the target of 450 GW by 2030.

Initially thought of as an expens· alternative to conventional ener least till the target was first set in 2015, renewables had started becoming competitive by 2019. “These were gutsy targets to set, because nobody at that time had foreseen such a massive growth of renewable energy,” Sinha says.
ReNew Power’s own capacity had touched 500 MW in 2016 and doubled in a year to 1 GW. Today, it has grown to 10 GW at more than 100 sites.

The latest thrust to the sector has come after the net-zero announcements in Glasgow. With most countries promising net neutrality by 2070, BloombergNEF predicts hectic action with investments to be between $92 trillion and $173 trillion over the nex 30 years. “Annual investment will need to more than double to achieve this, rising from around $1.7 trillion per year today to somewhere between $3.1 trillion and $5.8 trillion per year on average over the next three decades,” reads the BloombergNEF’s New Energy Outlook , 2021.

Back home, while the net-zero target of 2070 presents a plethora of opportunities, the challenges are also many. “The policy environment has to keep pace with the changing technology. There will always be time when technology develops but a corresponding policy is not there. So, policymakers need to be on board,” says Sinha.

Sinha feels that India turned the corner in being serious in meeting ambitious renewable energy targets around 2020-21. Technological evolution brought the cost of renewables down. “It suddenly changed the mentality of buyers and [distribution companies, or] discoms, because the realised that renewable energy is cheaper than the conventional source of power,” he adds. The Central Electricity Authority, or CEA, predicts that a 66% share of India’s total electricity production by 2030 will be consumed by commercial or industrial customers, compared to 50% in 2018. So, the adoption of renewable energy by India Inc is key to the country’s success in its climate commitments, energy security and reduction of carbon footprint. In the past couple o years, corporate power purchase agreements for renewables have crossed the 1,000 MW mark. Sinha’s optimism and the government’s push for the adoption of renewable energy by India Inc apart, its distribution remains a challenge, as debt-laden discoms continue to be the weakest link in the sector.

India is the third largest energy-consuming country in the world, with the highest rate of growth in electricity demand. But it faces multiple challenges. It has to significantly improve its per capita electricity consumption, ensure energy efficiency and cut emissions to meet global commitments. The single biggest hurdle that comes in the way of meeting these targets is the financial viability of its state-owned discoms.”The Central government is on board on what needs to be done, but state governments are just not there. In every election, you see politicians announcing free power and so on-which is not the right way to go. Ultimately, it leads to the poor health of discoms, underinvestment in the grid and poor quality of power supply. That is one of the biggest problems we have in the sector that needs to be addressed,” Sinha explains. He is acutely aware that till the financial mess at discoms is not cleaned, the renewable energy penetration will remain a pipedream.

Despite his disagreement with the political talk on the issue of power subsidy and a background in politics-Sinha can claim to have political lineage now, as both his father and brother are in politics-he is in no mood to exit the sunshine sector. “There are many ways of contributing to society, and I am more than happy doing what I am doing,” he adds.

Sinha has all the right reasons to be happy. As he turns 56 this month, he has become the largest private player in one of the fastest growing sectors in an economy that ranks amongst the top countries in EY’s Renewable Energy Country Attractiveness Index.