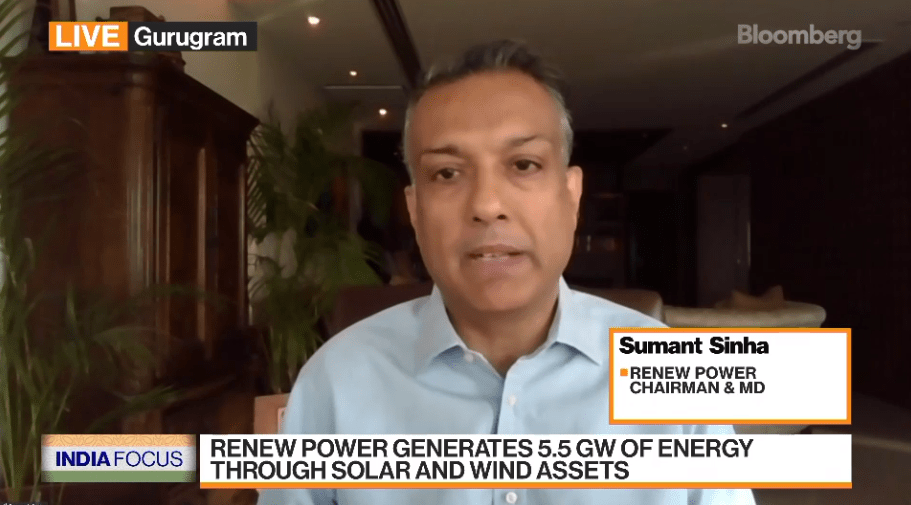 ReNew Power Pvt., India’s largest renewable energy company, is looking at an overseas listing of shares to raise funds as it invests in growth for the coming decade.

“As far as our own IPO plans are concerned, it’s something we are certainly evaluating and at an appropriate time we will certainly look at going forward on that side,” Chairman and Managing Director Sumant Sinha said in an interview with Bloomberg Television on Wednesday. “ESG investing as a theme is becoming bigger and will continue to grow, and so I think the capital markets do offer us a good opportunity to raise capital at some point.”
India’s Renew Power Evaluating IPO, Chairman Sinha Says (Video)
The incoming administration of U.S. President-elect Joe Biden will make investments in environmental, social, and governance stronger, making it more attractive for ReNew Power to consider tapping international capital markets, Sinha said. The renewable energy sector in India requires almost $500 billion of investment in generation, transmission and distribution, he said.
The company, which has investors such as Goldman Sachs Group Inc., Abu Dhabi Investment Authority and Canada Pension Plan Investment Board, is looking to raise capital to funding renewable energy projects in India, which expects 40% of its power-generation capacity to come from non-fossil sources by 2030. The country seeks to expand its renewable power capacity fivefold to 450 gigawatts by the same period.

India’s energy demand will double over the next 10-14 years, with renewable energy sources making up two-third of the new demand and replacing coal-based electricity, he said.

“Today, both solar and wind energy are significantly cheaper than coal-based power,” Sinha said. “Once we are able to deal with the intermittent issues through cheaper storing solutions and so on, certainly solar and wind will become de-facto choice of anybody who wants to buy new energy.”

He expects energy from renewable sources to be 30%-40% cheaper than coal-based power in the next three-four years.